Part 1
Now, here is a day of disaster that I think you may find enjoyable. I blame Melinda for most of it though. We call it our “Birthday Cake Calamity.”
It all started on the morning of Mother’s 50th birthday. She had gone into town with Justin, after our birthday breakfast, to pick up some thread she needed for her cross-stitch pattern. Melinda pulled me aside when they left. “Andi, do you want to help me make Mother’s birthday cake?”
I scrunched up my nose, “Make a cake? What for? Luisa and Nila have no trouble whatsoever doing it by themselves.” I started to leave, when she reached out and caught my hand.
“Come on, Andi,” Melinda pleaded. “Mother would love it more if we made it for her. You know how much she appreciates those kinds of things. Please?”
Never had I seen Melinda so eager to do something with me before. Most of the time she would tell me to go away, or that she could take care of things herself. But here she was, asking me to make a . . . cake?
“Seriously?” I asked, wide-eyed. “But . . . we don’t know how to make a cake.”
“Luisa can show us a few pointers. I’m sure she won’t mind. But I want to try to make it all ourselves.”
“You’re loco.” I laughed and pulled my hand away. “I can’t tell a cake pan from a frying pan. Let’s think of something else.”
“No, Andi. I want to make Mother a birthday cake. Please do it with me?”
I could tell she was not going to be shaken. “Why are you asking me?” I could tell there had to be more to it than met the eye.
“Well, I just know that Mother would love it if we both made it for her. Besides, you would get half the credit.”
In other words, if something goes wrong I get “half” the blame. I should have known better. But I was too surprised that she wanted to include me to think there was another side to it.
“Well, if you really want me to, I—”Before I could finish, she had dragged me into the kitchen and was beginning to slip an apron over my head. “We’re going to make Mother’s birthday cake,” she was telling Luisa.
“Ouch!” I cried as Melinda pulled at the apron strings. “Not so tight!” Obviously she didn’t hear me, for the apron became tighter as she rattled away to our cook.
“Melinda!” I shouted. I could feel my face turning blue.
“What?” she asked, slightly annoyed that I had interrupted her.
“You’re tying this way too tight.”
“Fine, tie it yourself,” she said in her bossy sister’s voice. The two strings fell to my sides. “We’ll need two large bowls and some spoons . . .” Melinda was in her own world.
Now, a little frustrated, I began to tie up my apron.
“But, señorita,” Luisa warned. “You girls have no experience at this kind of thing. Always someone is here to help you. Never you do it by yourselves.”
“Why don’t you help us?” I asked, taking a handful of things from Melinda.
“Sí, I willing to help you. This is big job for inexperienced girls.”
Melinda didn’t seem pleased. “But we’ve got to start somewhere. Every person has to try new things once in a while.”
“I agree with Luisa,” Nila spoke up for the first time. “She know how much you want to do this, but it is much work. You need help.”
“I’ve got Andi.” Melinda smiled and put her arm around my shoulder. Yet, her voice sounded a little doubtful.
“Sí, you have Andrea. But she is clumsy at times and somewhat impatient. I think I help you.”
I know Luisa meant well, but calling me clumsy and impatient (although it is true) was too much of an offense.  “You think we can’t do it?” I huffed. “Well, just you wait and see what a masterpiece we will make for Mother.”
Rolling up my sleeves, I shouted to Melinda, “Come on, girl! We have a cake to bake!”
Melinda smiled with satisfaction. “That’s more like it. We’ll show them what’s what!”
Nila sighed. “Buena suerte. Good luck.”
Show them indeed. Had I known what lay ahead, I would have hung that apron back up on the wall. 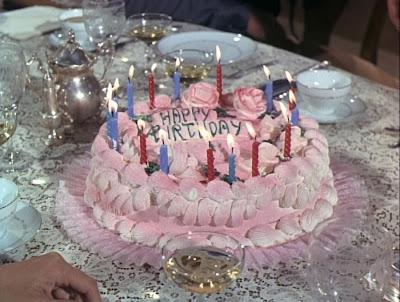 P.S. (Andi's addition. Here is what the cake looked like after Luisa and Nila baked one the next day. This is what a birthday cake is supposed to look like.)
The End