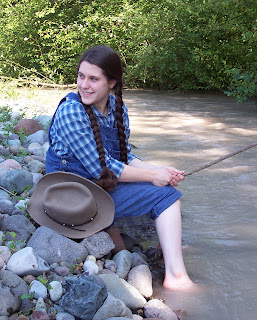 One day in early August, I was out fishing with my friends Cory Blake and Rosa Garduño.
“Cory, you and Jack are good friends, right?” I began.
Cory nodded. “Yes we are. Why do you ask?”
I recast my line. “Well, I was wondering what exactly happened to his mother. Do you know?”
He shrugged. “Well yeah, I’ve heard his pa talk about it a few times.” He sat there for a minute, saying nothing.
I sighed. “Well?”
Cory fell back on the crunchy brown grass and told me the story of Jack Goodwin’s childhood.
“Jack was about 5 years old when his mother came down with the typhoid.
Typhoid! Andi shivered. Typhoid fever was deadly.
“’Pa,’ little Jack asked his father one night after supper, ‘Where’s Mama?’
“Mr. Goodwin picked him up and hugged him,” Cory said. “He said, ‘Mama’s sick, son. She’s staying in with Doctor Blair. He’s trying to make her better.’
“Jack looked up at his Pa, his eyes full of worry. ‘Can I see her?’
“Jack’s pa shook his head when he asked that. ‘She needs lots of rest.’
‘Will she be okay?’
“His father sighed, holding his son even closer. ‘I hope so, Jack, I really hope so!’”
Cory took a deep breath, as if he didn’t want to tell the rest of the story. “After a couple of weeks, though, Mrs. Goodwin didn’t get any better. She only got worse.
‘Why can’t I visit her, Pa?’ cried Jack, ‘“I wanna see my mama!’’
“Mr. Goodwin kept a firm but gentle hold on Jack. ‘You can’t, son. I don’t want you to get sick too.’
“Poor little Jack burst out into fresh tears when he heard that. ‘But I want my mama! Please, Pa, let me just look at her, pleeease?’
“Mr. Goodwin decided that the boy could have at least one last look. He dressed him and took him to town. Mrs. Blair opened the door and let them in with a sad smile. When Jack saw his mother, somehow he wasn’t sad anymore. He knew that his mother was no longer in pain, but happy!
‘Goodbye, Mama,’ he whispered. ‘I love you.’ Then he looked up at his father and smiled. ‘She is happy now, Pa. Don’t cry.’”
Cory looked at me. “Mrs. Goodwin was one of the nicest ladies around. She always kept the family store clean, bright, and cheery. Jack told me that she always greeted everyone with a smile, and always gave the little kids a licorice. She was even nice to the people that were always gossiping about everyone and everything. Everybody liked her.” Cory smiled. “I bet you and I would have liked her too.”
I nodded. My throat was too tight to say anything.
“When she was laid to rest in the cemetery behind the old church, almost the whole town came to her service,” Jack said.
Rosa burst into tears. “Oh! Pobrecito! Poor little boy.”
I grimaced. “Poor Jack! I don’t know what I’d do if my mother died.”
Cory sat up, and continued the story. “Well, that was quite a few years ago, when they lived up in Gilroy [California]. A few years after Mrs. Goodwin died, Jack and his father moved down here to Fresno . . .
“‘Well, Jack, what do you think of our new store?’ Mr. Goodwin patted his son on the back.
“Jack looked up at his father. ‘Our store?’
“Mr. Goodwin nodded. ‘Yes, Jack. You are a strong lad of 9. I think that you and I could keep up a general store just fine indeed.’
“Jack jumped up and hugged his father’s neck. ‘Oh, yes, Pa! I’ll work so hard you’ll never need to hire help!’”
* * *
By then, it was time for us to start back for the ranch, just about suppertime.
That is, if our stomachs weren’t lying. I rode back in silence, thinking about what Cory told me. This happened, of course, long before Jack got into the wrong company. I better not say anything more about that, just in case some of you haven’t read Andrea Carter and the Price of Truth yet!